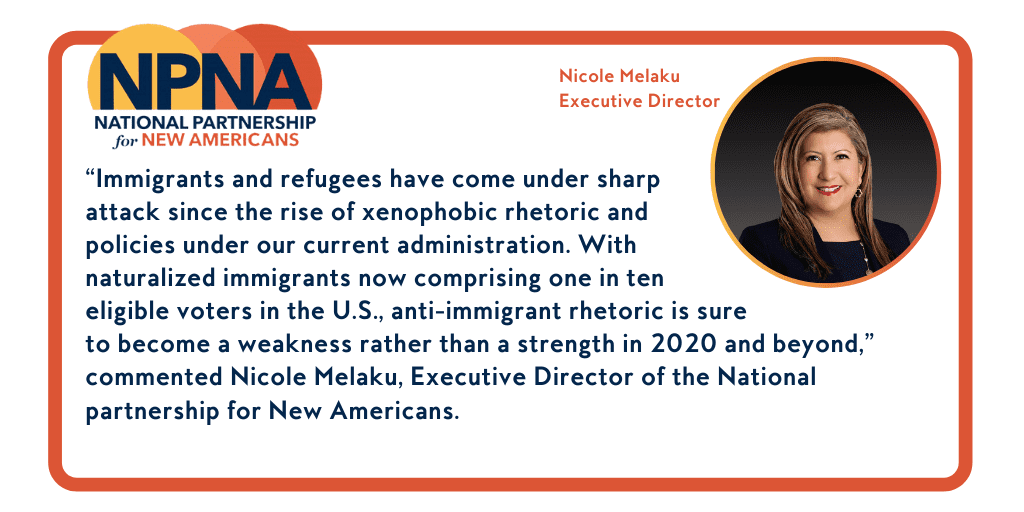 (WASHINGTON, D.C.) – Today on Citizenship Day, as we celebrate the ideals of full and inclusive citizenship, immigrant rights organizations are encouraging the approximately five million recently naturalized citizens to vote in the upcoming November elections via the “New American Voters 2020” campaign, a series of naturalization and voter registration events with the aim of engaging the projected 5 million newly naturalized voters since 2014 across the country.

As emphasized in a June report from NPNA, this growing electorate of newly naturalized voters comprise a significant proportion of eligible voters in politically contentious states, and have the potential to play a vital role in determining the outcomes of the presidential, senatorial, and state and local elections by casting their votes. Recently released state-specific reports on North Carolina, Wisconsin, and Florida from NPNA member organizations the Latin American Coalition, Voces de la Frontera, and the Florida Immigrant Coalition, respectively, showcase the rising electoral power of New Americans in the general election in battleground states.

The attacks on immigrants and their families will be on the minds of many first-time naturalized voters as they head to the polls this November. Nearly three million individuals have naturalized since 2016, and with impending USCIS fee increases set to take effect on Oct. 2, immigrants rights organizations anticipate an uptick in applications over the next month. NPNA members including CASA, CHIRLA (and One America are working to challenge the fee increases in federal court to ensure that citizenship remains accessible to working class immigrants and their families.

“Immigrants and refugees have come under sharp attack since the rise of xenophobic rhetoric and policies under our current administration. With naturalized immigrants now comprising one in ten eligible voters in the U.S., anti-immigrant rhetoric is sure to become a weakness rather than a strength in 2020 and beyond,” commented Nicole Melaku, Executive Director of the National partnership for New Americans.

This sentiment was echoed by Fabiola Landeros, community organizer at El CENTRO de Igualdad y Derechos in New Mexico, and a newly-naturalized citizen who will be voting for the first time this November. “As a new citizen myself, I urge those who are eligible to naturalize to use their new status to protect our families from the devastating impact of deportation,” said Landeras.. “We are seeing existing racial and economic inequities being exposed and exacerbated by COVID-19. Therefore, we need to exercise our rights as new citizens to lift our communities’ voices so they can be heard in the 2020 elections to ensure that we elect candidates that share our values.”

Rapidly changing demographics in key battleground states have been fueling the rise in power of this new electorate. In addition to New Mexico, North Carolina, Wisconsin and Florida have experienced a surge in the immigrant electorate. According to NPNA’s North Carolina New American Voters report, “an anticipated 98,937 to have naturalized from 2014 through 2020. . . [which] exceed[s] the margin of victory (48,511 votes) for the Senate seat that is up for reelection in 2020.” The Florida New American Voter report also finds that from  2014 to 2018, “the total number of citizens who naturalized from Haiti, Colombia, Jamaica, Venezuela, and Mexico exceeded the [2016 presidential election] margin.”

Similarly, in the crucial election battleground state of Wisconsin, new citizens’ votes, if cast, “can have an enormous and outsized role in determining who will sit in the White House in 2021,” as emphasized in the Wisconsin New American Voters report. Boosting their electoral power has been the priority of local organizations such as Voces de la Frontera, which is leading a grassroots campaign with the goal of encouraging the newly-naturalized use make their voices heard at the ballot box, in addition to  addressing access issues due to language barriers, the coronavirus pandemic, and deliberate voter suppression. “In a battleground state like Wisconsin, every single vote counts. New Americans have always been a key constituency for Voces de la Frontera not just during elections, but year round through our New Americans program. We are proud to join NPNA today on Citizenship Day, to get the record number of new citizens in Wisconsin and across the country to the polls,” said Christine Neumann-Ortiz, executive director of Voces de la Frontera.

The National Partnership for New Americans (NPNA) is a national, multiethnic, multiracial partnership of 41 immigrants and refugee rights organizations . across 37 states, that work to promote citizenship and integration among our diverse immigrant and refugee communities for the benefit of all Americans.  Follow us on Facebook at www.facebook.com/newamericanspartnership and Twitter at @npnewamericans