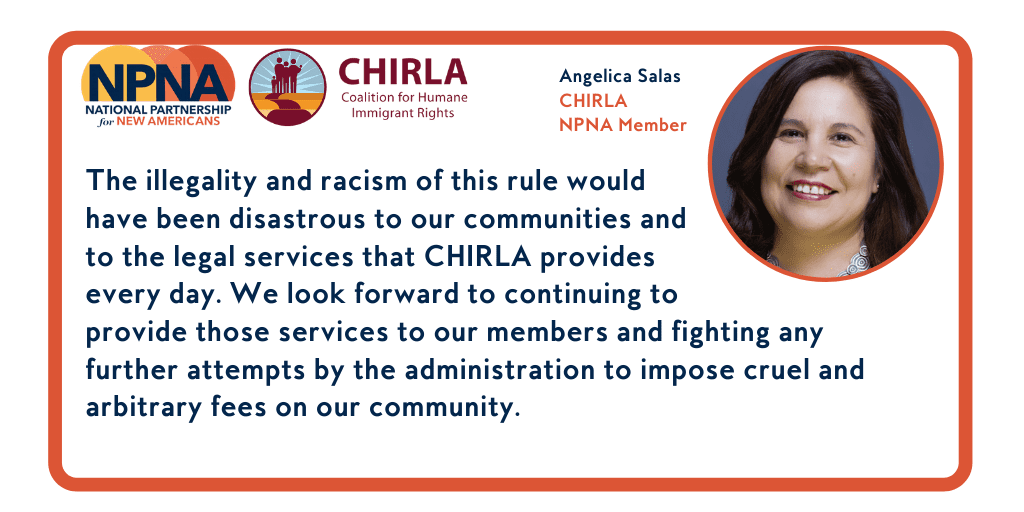 Federal Court in California Places Preliminary Injunction on Regulation that Would Spike Application Fees and Price out Millions, Days Before it was Set to Go into Effect

September 29, 2020 – Today, a federal court in the Northern District of California blocked one of the most draconian rules on citizenship, permanent residency, asylum, and access to other immigration benefits by placing a preliminary injunction days before the final fee rule was set to take effect on October 2.

The fee rule would have effectively priced out millions from immigration benefits by increasing citizenship from $640 to $1,170; increased lawful permanent residency and related application fees from $1,125 to $2,270; and added a $50 fee for asylum applications; among other increases. The rule would have also eliminated most fee waivers, of which the National Partnership for New Americans (NPNA) successfully fought for an expansion during the Obama administration.

“We are thankful that the court stepped in and struck down this administration’s attempt to place a wealth test on citizenship, asylum, and countless other immigration benefits,” said Angelica Salas, Executive Director of the Coalition for Humane Rights (CHIRLA), executive committee member of NPNA Board of Directors, and plaintiff in the lawsuit. “The illegality and racism of this rule would have been disastrous to our communities and to the legal services that CHIRLA provides every day. We look forward to continuing to provide those services to our members and fighting any further attempts by the administration to impose cruel and arbitrary fees on our community.”

The rule, which was originally proposed in November 2019, was opposed by NPNA, as well as NPNA member organizations that brought lawsuits against the rule like CASA, CHIRLA, and OneAmerica. NPNA argued that the rule: failed to comply with the Administrative Procedure Act; had multiple substantive legal violations; and was issued under the leadership of Ken Cuccinelli, who has not been confirmed as director of U.S. Citizenship and Immigration Services (USCIS) by the Senate and whose appointment violates the Federal Vacancies Reform Act.

“Today’s preliminary injunction shows that not only are USCIS’ proposed fee increases harmful to our communities but they are unlawful,” said Nicole Melaku, Executive Director of NPNA. “USCIS must change direction and work towards expanding access to citizenship, reducing the backlogs, and orienting itself as a customer service agency that adjudicates applications, not an enforcement agency that carries out the President’s exclusionary and white supremacist agenda.”

NPNA, whose members assist over 300,000 immigrants and refugees each year with immigration legal service assistance and outreach, opposed the proposed rule during the public comment period by submitting a comment against it. It has also advocated for Congress to halt the proposed rule as a condition for giving USCIS the emergency funding that it is requesting, in addition to other guardrails to hold the agency accountable, such as creating a plan to reduce the backlog of citizenship applications, disinvesting from denaturalization, and reversing a series of policies and practices that make citizenship less accessible and the process more complicated and lengthy.

The Partnership has long called for USCIS to reduce the backlogs so that they do not serve as a voter suppression tool that keeps would-be citizens from voting this November. Unfortunately, recent revelations from the agency show that around 290,000 applicants awaiting their naturalization interview won’t go through the process in time to register and vote. Nevertheless, according to NPNA estimates, around 5 million newly naturalized citizens will be able to vote in 2020, including in politically important states where their numbers exceed the margins of victory in the previous presidential and Senate elections.