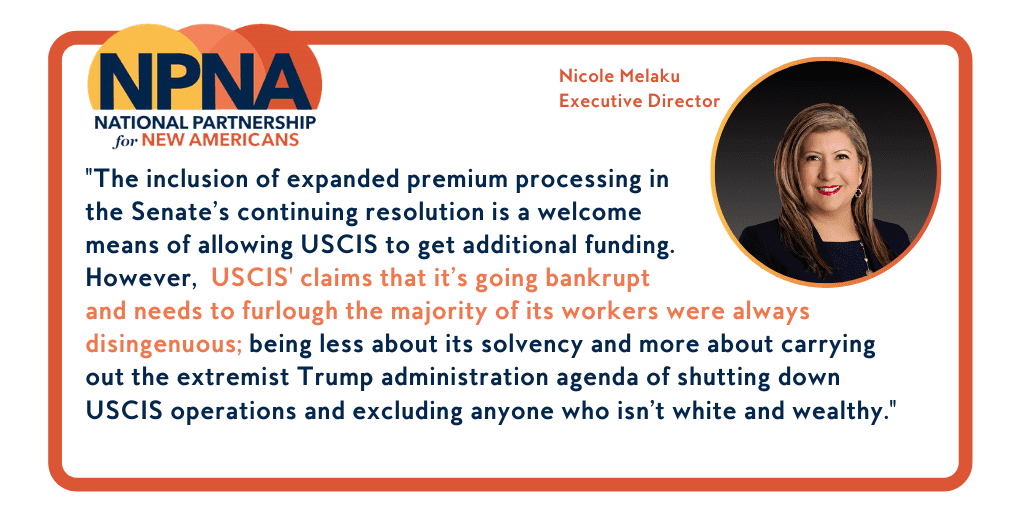 WASHINGTON – Today, the Senate passed a Continuing Resolution (CR) to keep the federal government funded at current levels through Dec. 11, after negotiations broke down around a legislative package in response to the coronavirus pandemic and economic crisis. The CR includes provisions that allow U.S. Citizenship and Immigration Services (USCIS) to expand “premium processing” – the option to conduct faster processing of immigration applications for higher fees. In response, Nicole Melaku, executive director of the National Partnership for New Americans, released the following statement:

“The inclusion of expanded premium processing in the Senate’s continuing resolution is a welcome means of allowing USCIS to get additional funding. However, the agency’s claims that it’s going bankrupt and needs to furlough the majority of its workers were always disingenuous; being less about its solvency and more about carrying out the extremist Trump administration agenda of shutting down USCIS operations and excluding anyone who isn’t white and wealthy. Congress needs to hold USCIS accountable, including by halting the immigration application fee increases that were temporarily blocked by a federal court yesterday and that, if effective, will price out millions of low-income and working class immigrants. Failing to do so amounts to Congress allowing the administration to limit access to citizenship and other life-changing forms of immigration relief.”