NPNA Family Protection Network denounces the inclusion of now abandoned citizenship question in Census Test Survey after its rejection by the SCOTUS and abandonment by President Trump.

Chicago– In a period of constant threats of increased ICE arrests and raids, an entire housing complex of Latinos in North Carolina have been asked to fill out a Census Test Survey that asks if the family members are U.S. citizens, and also asks for the respondent’s name and phone number.

The Census Test Survey form, which was sent to approximately 480,000 housing units, is supposedly to “help fine-tune the planning for the 2020 Census Nonresponse Follow Up (NRFU) operation”, according to the Census Bureau’s website.

The Citizenship question was rejected after voluminous proof was offered that it suppresses immigrant response rates and was likely included to intentionally dilute Latino voting strength. The National Partnership for New Americans actively advocated against its inclusion in the U.S. Census.

Jose Hernandez de Paris, Executive Director of the Charlotte, NC Latin American Coalition, stated: “We are actively working to protect our community from the mass deportations threatened by President Trump. Asking the citizenship question in the Census Test Survey, along with personally identifying information, is an iron-clad guarantee that many immigrants will not respond.”
“We encourage all immigrants to participate in the actual 2020 Census Survey which will NOT include a citizenship question,” said Sarah Mesick, Director of Programs at NPNA “We understand the real concern and the fear families have in completing the 2020 Census Survey, and our Family Protection Network will continue to inform and educate immigrant communities on their rights and their power to be fully counted in 2020.”

Senior Census Bureau officials have confirmed verbally at several public meetings that community members will be able to skip questions on the Census form and still submit the form. A form with a skipped question will still be counted. 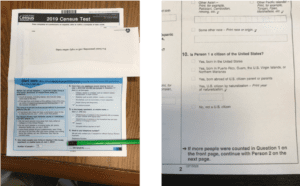 The Latin American Coalition is a community of Latin Americans, immigrants, and allies that promotes full and equal participation of all people in the civic, economic and cultural life of North Carolina through education, celebration, and advocacy.

The National Partnership for New Americans (NPNA) Family Protection Network, a coalition of 35 immigrant rights organizations across 37 states providing immigration legal services and protection to immigrant families, are in the frontlines in immigrant communities responding to the questions and fears families have upon receiving the Census Test Survey, while preparing for the actual Census Survey in 2020.