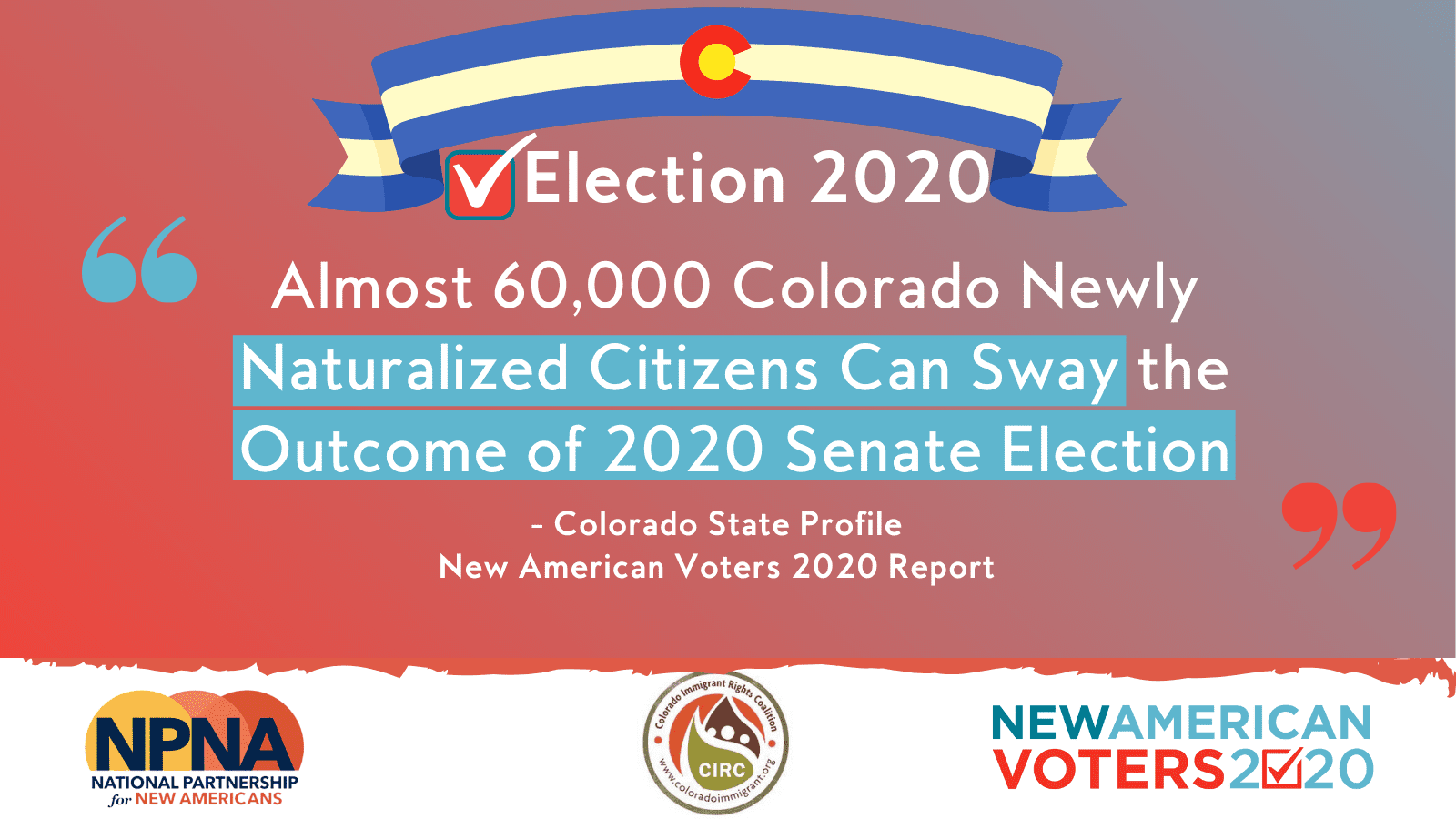 A report release today sheds light on the potential impact of newly naturalized citizens on national, state, and local elections

View Recording of the Press Conference

DENVER – Almost 60,000 people have naturalized in Colorado since 2014, according to a report released today by the Colorado Immigrant Rights Coalition (CIRC) and National Partnership for New Americans (NPNA). These potential new voters exceed the margin of victory for the 2014 senatorial election (49,729 ballots).

Recently naturalized Coloradan Hugo Alarcón says he’s excited to “take this next step” of voting for the first time.

“In past elections, I had opinions. But as a non-citizen resident, I didn’t have a voice. Now, I can vote to protect my community,” said Alarcón.

Formerly undocumented, Denver-based immigration attorney and first-time voter in a presidential election, Cristina Uribe Reyes, expressed similar motivations for voting in 2020. “This will be my first time voting in a presidential election. My vote in November isn’t just about me. It is a vote for my family and friends, including my parents and husband, who are not yet able to vote, and for countless clients and future clients who have been so brutally impacted by immigration policy changes.”

Alarcón and Uribe Reyes are two of an estimated 5 million individuals across the country that have naturalized since 2014. Of this group, around three million naturalized after Donald Trump’s election, making them one of the most significant electoral groups in recent U.S. history. The national New American Voters report analyzed U.S. Citizenship and Immigration Services (USCIS) data on naturalizations from fiscal years 2014 to 2018, applications approved in fiscal year 2019, and estimates for 2020, based on spikes of naturalization before the 2016 presidential election. Despite the mismanagement of USCIS and its backlog of over 700,000 citizenship applications serving as a voter suppression tool, approximately 5 million newly naturalized citizens can sway the outcome of this years’ presidential, senatorial, and gubernatorial elections.

This effort is part of CIRC’s Vote Your Values and NPNA’s New American Voters 2020 campaigns. The latter is a national campaign which promotes voting among newly naturalized Americans, and includes the participation of NPNA member organizations such as CIRC, as well as national partners, mayors, city governments, and influencers to lift  up the importance of voting for naturalized citizens.

“This a multi-racial, multi-generational voting bloc that represents a powerful political force in the upcoming elections. At a time when anti-immigrant rhetoric and policies are high in our country, these New Americans Voters can raise their voices and sway the outcome of elections for the White House and Senate, governorships, and state legislatures. The first step to exercising that power is to register and vote. NPNA is proud to join with CIRC today as they work across Colorado to encourage New Americans to exercise the most influential democratic action a citizen can take, which is voting,” said Nancy Flores, NPNA deputy director.

Many of these new citizens have naturalized in response to the multiple attacks on immigrant and refugee communities. Ian Pham, communications and development manager of the CIRC Action Fund, argued that, “the anti-immigrant climate in this country, far from deterring communities, has become a driving force to attain citizenship.  With this level of enthusiasm, new Americans will have a dramatic impact on local, state, and national races. That’s the political capacity these New Americans Voters have.”

The Colorado Immigrant Rights Coalition (CIRC) is a statewide, membership-based coalition of immigrant, faith, labor, youth, community, business and ally organizations founded in 2002 to improve the lives of immigrants and refugees by making Colorado a more welcoming, immigrant-friendly state.

The National Partnership for New Americans (NPNA) is a national multiethnic, multiracial organization that represents 39 of the largest regional immigrant and refugee rights organizations in 35 states. Its members provide large-scale services for the communities, to leverage their collective power and expertise for a national strategy. More information about the New American Voters 2020 campaign is available at http://newamericanvoters2020.org/