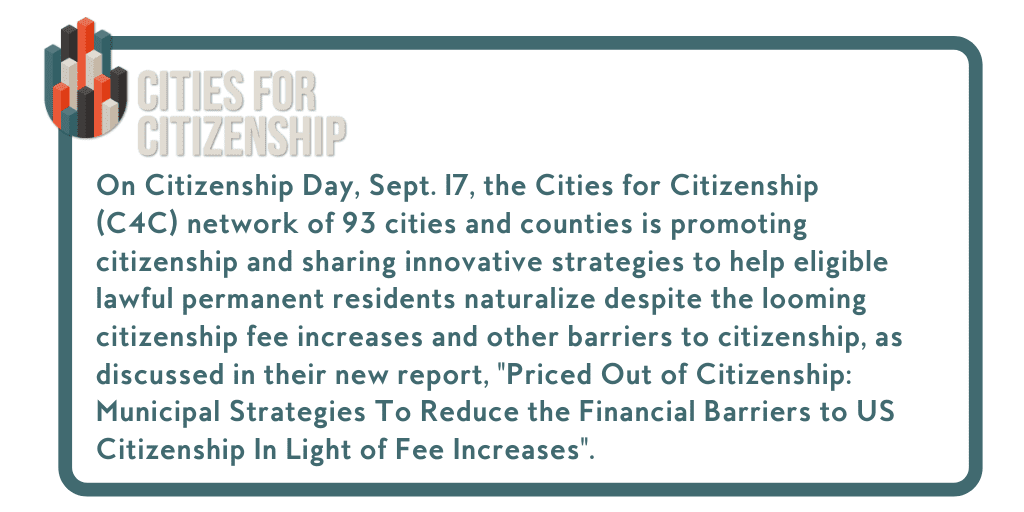 WASHINGTON – On Citizenship Day, Sept. 17, the Cities for Citizenship (C4C) network of 93 cities and counties is promoting citizenship and sharing innovative strategies to help eligible lawful permanent residents naturalize despite the looming citizenship fee increases and other barriers to citizenship, as discussed in their new report, “Priced Out of Citizenship: Municipal Strategies To Reduce the Financial Barriers to US Citizenship In Light of Fee Increases“.

The report is a response to new service fees and rules finalized Aug. 3, by the U.S. Citizenship and Immigration Service (USCIS) which will increase the citizenship application filing fee by 83 percent from $640 to $1170. The new rules are scheduled to go into effect Oct. 2, unless a federal court stops it. The rule also increases other immigration application fees while eliminating most fee waivers, making the long, multi-step pathway to citizenship even more financially burdensome and out of reach for low-income and working class immigrants.

The Cities for Citizenship report elevates effective models that cities and counties have implemented to reduce the economic burden on those seeking U.S. citizenship such as zero-to-low-cost loan programs, scholarship funds, and partnerships with local community-based organizations.

“Research shows that citizenship is a meaningful pathway to bolster the economic security for individuals and the cities in which they live,” said Gregory Schiefelbein, New York tri-state director, Citi Community Investing and Development. “Citi is proud to support Cities for Citizenship in promoting strategies to address financial barriers and connecting eligible immigrants to tools and resources to strengthen their financial identities through naturalization.”

“The nearly doubling of the citizenship application fee and elimination of a fee waiver is going to devastate access to citizenship for millions of immigrants. Local and state programs that reduce or supplement the application costs are essential and the Cities for Citizenship (C4C) Priced Out of Citizenship report serves as a guide to assist and motivate other localities to pursue similar strategies. We are grateful for C4C’s leadership in helping to break down barriers to citizenship across the country.” said Nicole Melaku, executive director of the National Partnership for New Americans.

“As barriers to U.S. citizenship continue to increase, cities and counties from all over the nation continue to work tirelessly to welcome immigrants and make sure that any person who is eligible to become a citizen has the resources to do so. The Priced Out of Citizenship report showcases the great strides cities and counties have made to make U.S. citizenship a reality to low-income and working-class immigrants and hopes to inspire other localities to join in those efforts,” said Ana María Archila, co-executive director of the Center for Popular Democracy.

“On this Citizenship Day, we celebrate the great power and role immigrant communities have in shaping our nation’s civic and cultural life,” said Bitta Mostofi, commissioner of the NYC Mayor’s Office of Immigrant Affairs. “We also recognize not only the importance naturalization plays in establishing a more inclusive democracy, but the courage and determination it takes to go through this process in the face of the ever-growing barriers. The NYC Mayor’s Office of Immigrant Affairs is proud to have partnered with the New York Immigration Coalition and cities nationwide to support our immigrant residents on their pathways to citizenship.”

“Our country was built on the ingenuity, values and drive of our immigrants and refugees, and it’s in our interests to make the path to citizenship easier—not harder—for the thousands of individuals and families who continue to come to our borders in pursuit of their dreams,” said Chicago Mayor Lori E. Lightfoot. “The Cities for Citizenship report offers both a sound and urgent alternative to the increased naturalization costs being put in place by the USCIS in a matter of days which will severely hamper our ability to fully ​realize the incredible talent across this great nation and further undermine our moral example to the world as a welcoming home for all people, no matter their background.”

The C4C network continues to urge lawful permanent residents to naturalize before the fee increases go into effect Oct. 2 and pledges to work with immigrant communities to naturalize the millions of eligible immigrants, should the increases go into effect.  For more information on Cities for Citizenship and the Priced out of Citizenship report, please visit citiesforcitizenship.com.

About Cities for Citizenship

Cities for Citizenship (C4C) is a growing national initiative of 93 cities and counties aimed at increasing citizenship among eligible U.S. permanent residents and encouraging localities across the country to promote and expand citizenship programs. It is chaired by New York City Mayor Bill de Blasio, Chicago Mayor Lori E. Lightfoot, and Los Angeles Mayor Eric Garcetti, with support from the Center for Popular Democracy and the National Partnership for New Americans. To learn more or join Cities for Citizenship, visit http://www.citiesforcitizenship.com.

The National Partnership for New Americans (NPNA) harnesses the collective power and resources of the country’s 41 largest regional immigrant rights organizations in 37 states. Our aim is to achieve a vibrant, just and welcoming democracy for all. Immigrants are the soul of our organization, and immigrant communities inspire, implement and champion our work. NPNA sponsors the annual National Immigrant Integration Conference and, in the past two years, NPNA partners have assisted over 50,000 immigrants to become U.S. citizens and pursue legal status.

About Center for Popular Democracy (CPD)
The Center for Popular Democracy is a national network of more than 50 community organizations dedicated to achieving racial and economic justice through local grassroots organizing. CPD trains and supports leadership, staff, and members to grow base-building organizations to scale and leverage that strength to win cutting-edge policy victories at the federal, state and local level.